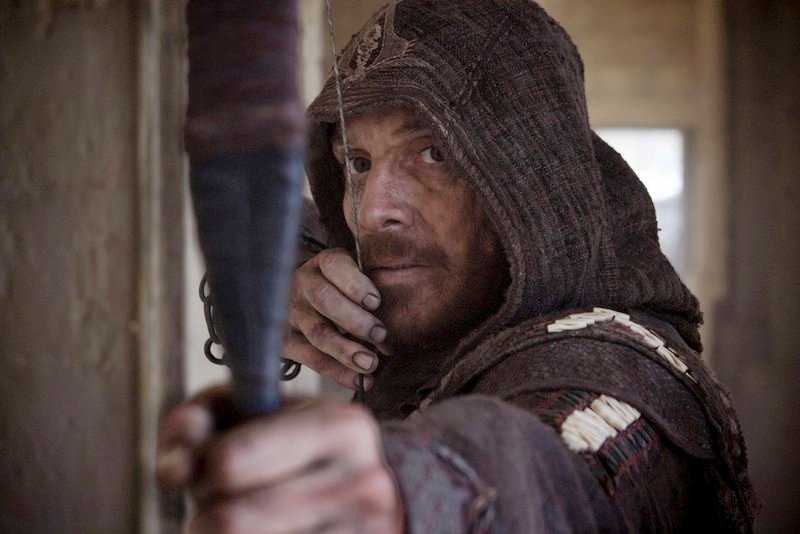 for intense sequences of violence and action, thematic elements and brief strong language. 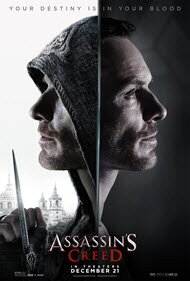 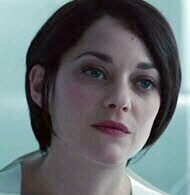 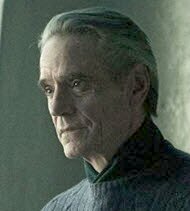 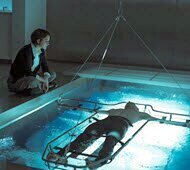 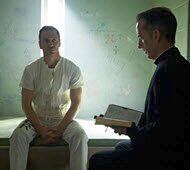 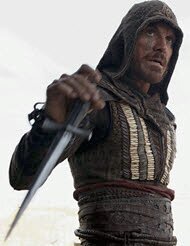 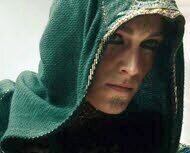 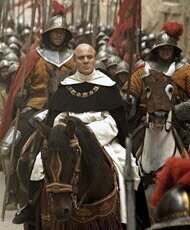 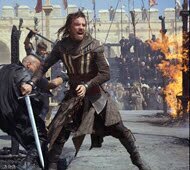 Who were the real Assassins? (Arabic: حشاشين Hashashin, from Assassiyun: “those faithful to the foundation”)—a name used to refer to the medieval Nizari Ismailis, an Islamic sect within a branch of Shia Islam. See Wikipedia.

The worldview of this film is agnosticism and existential nihilism.

“Your destiny is in your blood”

Watching a loved one die in front of them is an event no one should ever bear witness to. This is particularly true when it happens to a young child, watching a parent or a close relative pass from this world into eternity.

Take for example our protagonist Cal. He grew up on the outskirts of Baja, California in a tiny home with his mom and dad. One day, after trying some death-defying stunts outside, he accidentally walks into the kitchen to find his mother sitting at the kitchen table, as he notices blood slowly dripping down her face, only for Cal to realize his mother has been murdered. Cal turns to his right and notices his father in a hood and robe with a knife, slowly approaching him as he tells his son, “Your blood is not your own. Run!” And, of course, Cal runs off.

30 years pass and Cal’s life has taken a rough turn. In fact, he murdered a pimp and is sentenced to death by lethal injection at a Texas State Penitentiary. After his lethal injection occurs, however, he strangely awakes to the beautiful, intelligent Dr. Sofia Rikkin (Marion Cotillard) of the Abstergo Foundation.

Why did she save Cal? Because Cal’s DNA contains a rare ancestry, dating as far back as 500 years, linked to a group called to The Assassins. The people of Abstergo are run by a group called the Templar Order, who wish to use Cal’s ancestry to find a mysterious ancient artifact known as the Apple of Eden, a device that could control mankind’s free will.

So, how EXACTLY will they use Cal’s ancestry? Through means of a device known as the Animus, which allows Cal to live through his ancestor Aguilar’s memories and determine the exact location of the Apple of Eden. It’s the Templars vs. The Assassins, but the question remains… which side is the RIGHT side?

To the avid “Assassin’s Creed” video game fanatic, such as myself, when the announcement was first made, roughly a year and a half ago, that a feature film was to be made of the video game series, no doubt many fans were ecstatic and, dare I say, awe-struck that this was coming. And yet, in my mind, as time went on, as I’m sure it did in many of those who have been faithful to the series, I asked myself “which direction will the film take that the game didn’t?” “Will the movie be better than the game?” “What will be tied into the original series,” and, most importantly, “Will the movie do the series justice or weaken the series entirely?”

For those who are unfamiliar with the series (such as Michael Fassbender who, humorously had never played the games or knew the games existed before taking on this role), from a video gamer’s standpoint The “Assassin’s Creed” video game series, itself, contains complex, intricate and beautiful stories in each game, while allowing the player to immerse themselves in the game and, occasionally, take in some historical perspectives, a blight the heavy (to sometimes extreme) amounts of violence one must undertake as you play an Assassin.

One might ask, “Is it fair to compare the video game series to the movie?” The answer to that question is, “Yes.” The majority of those who will see this film will be avid fans of the series, such as myself, and as such, if we are going to drop $15 at the box office, the film must contain the same complex, intricate story and thrilling performances that were found in the series, but also allow opportunities to appeal to those who are unfamiliar with the series to become familiar to the Assassin world. My final take on the film itself? Well… I’ll get to that. In the meantime…

Violence: Heavy to Extreme. Anyone who has ever played an “Assassin’s Creed” video game knows there are heavy amounts of violence. The film is no exception. Violence in the film includes multiple scenes where Templars and Assassins (during the memories and out in the “real word”) are stabbed, shot by arrows, have their throat cut (though these scenes are rarely graphically shown). Blood accompanies many of these scenes. Cal’s mother is seen with her throat slit. A few characters are shown being assassinated (by means of air assassinations, stabbed in the stomach, throat slices, etc.). There is also a scene where Cal, as a young boy, tries to ride his bike off the roof of his mobile home onto on a trailer, but misses and falls. Cal, as an adult, is seen being lethally injected in prison.

Profanity: One instance of f*ck, sh*t, and one of d*mned and h*ll.

Sex/Nudity: There is a suggested relationship between Aguilar and another Assassin, and they do share a kiss at one point.

Spiritual Content: This is a red flag. In consultation with another source, Plugged In, The Templar Order is indeed, a organization that, in the film, serves as an attack on Catholicism and organized religion. To some, the Templars in the film, serve as a theme of anti-religion, as in the film they constantly state they wish to, and I’m paraphrasing here, “end the creed by ruling the world under one order and thereby ending violence created by man.”

Also it’s important to note that in the Asssassins’ Creed it states that “nothing is true, and everything is permitted” and that the Assassins “live in darkness to serve the light.” This kind of philosophy can be problematic when taken in the wrong context by viewers who may not have proper discernment (such as younger viewers), so parental caution is advised.

If you look in the Bible, you will find times where violence occurred. Murder, no matter the reason, was never justified, such as in the case of Cain and Abel, where the Lord said:

“Whoever sheds the blood of man, by man shall his blood be shed; for in the image of God has God made man” (Genesis 9:6).

The apostle Paul told us that we are to abstain from it when it’s possible:

“Do not repay anyone evil for evil. Be careful to do what is right in the eyes of everybody. If it is possible, as far as it depends on you, live at peace with everyone.” –Romans 12:17-21

Jesus also warns us that whatever we take in, however we choose to live our lives, will be what we produce in turn, for good or for evil and so that we must watch ourselves accordingly:

“Again Jesus called the crowd to him and said, ‘Listen to me, everyone, and understand this. Nothing outside a person can defile them by going into them. Rather, it is what comes out of a person that defiles them.’ After he had left the crowd and entered the house, his disciples asked him about this parable. ‘Are you so dull?’ he asked. ‘Don’t you see that nothing that enters a person from the outside can defile them? For it doesn’t go into their heart but into their stomach, and then out of the body.’ (In saying this, Jesus declared all foods clean.) He went on: “What comes out of a person is what defiles them. For it is from within, out of a person’s heart, that evil thoughts come—sexual immorality, theft, murder, adultery, greed, malice, deceit, lewdness, envy, slander, arrogance and folly. All these evils come from inside and defile a person.” –Mark 7:14-23 (NIV)

I promised that I would conclude with my overall take on “Assassin’s Creed.” To be completely honest, I wouldn’t tell you not to see it, but I’m not telling you TO see it either. Filmmaking-wise, it’s both a “hit and a miss.” The performances are about average, the CGI is a bit much at times (I definitely feel they could have used actual parts of Spain for the film), and the plot had a few too many layers to unravel to enjoy completely. The film is most certainly and strongly NOT for children or for those who are uncomfortable with heavy amounts of violence.

My final thoughts? Pass on this one.

Positive
Positive—I love the games, and this is an almost perfect game-to-movie movie.
My Ratings: Moral rating: Better than Average / Moviemaking quality: 5

Brittanie , age 27 (USA)
Negative
Negative—This is typical of many modern films which rely too heavily on special effects and seem to put little effort into the story. El Stinko.
My Ratings: Moral rating: Average / Moviemaking quality: 4

Leonardo, age 74 (USA)
Negative—I think the “Assassin’s Creed” is simply a bad movie. Acting is below average and filmmaking in general is pretty bad. The way the characters react on interactions with other characters is mostly odd and unnatural.

Also, this is one of those movies where the pace of normal interplay is way too fast. The movie doesn&rsquott give characters time to relate what’s just said to them or what just happened. They just unnaturaly counter like a machine. Humans don’t react that way. Simply reading the lines is not acting. See all »

That all is probably because the makers want to show as much fighting and stunts as possible, so they limit the time from other scenes. It is understandable but it will unavoidably produce weak acting experience.

The fight scenes and stunts are maybe slightly more ambitious than the average, but not groundbreaking in any way, and their quality will not compensate the other flaws of the movie.

Plot is quite weak also. I think this movie could have been much better with little more thinking.
My Ratings: Moral rating: Offensive / Moviemaking quality: 2

Kalle, age 44 (Finland)
Comments from young people
Positive—I like the movie. I do admit that it seems objectionable to Christian doctrine, but not quite. The primary goal of the Assassins is freedom of thought, and therefore the Assassins are unaffiliated with a specific religious identity of any kind. They are Agnostic level belief (in the sense that they are simply more liberal), and individual Assassins have their own beliefs. The Templars are described as purely Atheistic, and are discontent with tolerating other religions.

In the previous games, they used the Christian and Islamic religions as scapegoats for influence. The point behind this is to express that religious people, and Atheists, Agnostics, etc., have roughly the same level of free thinking, because they choose their own paths. Though I don’t see how an innocent kiss is considered sexual, unless it was very passionate.
My Ratings: Moral rating: Better than Average / Moviemaking quality: 5