for intense violence, bloody images and language throughout. 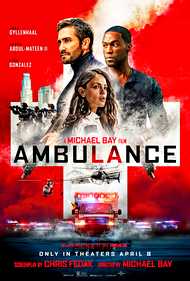 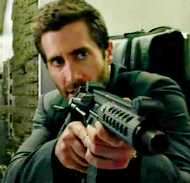 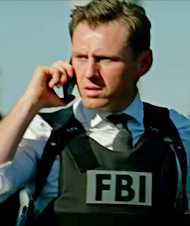 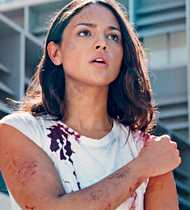 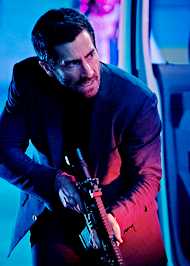 “Food gained by fraud tastes sweet, but one ends up with a mouth full of gravel.” —Proverbs 20:17

Gravel is the stage upon which Michael Bay’s latest action feature, “Ambulance,” plays out. Its tone is the grinding of wheels on tar interspersed with the roar of high-octane combustion and the rat-tat-tat of machine-gun fire. Instead of a roller-coaster thrill ride, the movie feels like a nightmare trip in the back seat of a wayward cab with a driver who is not just out of bounds, but out of control.

Bay’s blockbuster is a reworking of a 2005 Danish film of the same name. The gritty, claustrophobic tone of the earlier, and better, film is scrapped by the Bay team who prefer wide open spaces, vast expanses of road, pavement and sky, and prideful cityscapes whose soaring columns beckon to be worshiped as idols or taken down in balls of fire. His Los Angeles is less a boulevard of realized or broken dreams than a Lego construction waiting to be trampled and crushed underfoot.

Very little of the city looks familiar (or maybe it just speeds by too quickly) save the dry and abandoned Los Angeles River, once again used as a set piece for a chase scene that should be a dizzying thrill ride but here is more bumble than rumble. The decayed landscape lacks the sense of by-gone glory that made its presence in “Point Blank” (1967), “Chinatown” (1974), and “Terminator 2: Judgment Day” (1981) so iconic, and ironic.

Amidst the array of car flips, assault rifle barrages, helicopter swarms and explosive balls of fire there is a morsel of a plot, one that smolders next to the raging fire of the action sequences.

Will (Yahya Abdul-Mateen II) is unable to cover an experimental surgical procedure that his wife requires. He seeks financial help from his brother, Danny (Jake Gyllenhaal), a career criminal, who enlists Will to join him as part of “the biggest bank heist in LA history,” a haul of $32 million. Already the story has holes big enough to drive several emergency vehicles through. Has Will not heard of Medicaid or Obamacare? Do doctors and hospitals charge anything, let alone hundreds of thousands of dollars, for surgery that is still in its experimental stages? If Danny is such a criminal mastermind (he even took college criminality courses so he could think the same way crime-stoppers do), couldn’t he somehow scrounge up two hundred thousand to help his brother? Why would Danny, seemingly on a whim, enlist Will, a Veteran of the war in Afghanistan who earned a Purple Heart, but who has no experience in bodega stickups let alone huge bank hauls, to help him pull off “the biggest heist” ever?

Will and Danny’s plan swings into action but hits a snag when their get-away vehicle fails. The driver of the very conspicuous tank-like truck admits that it’s a piece of junk, so one must wonder why Danny, the scheme’s mastermind, would use a mangy driver behind the wheel of a mangled car to stage his grand escape. Wouldn’t that have been one of the first topics in his criminology course?

From there things quickly go awry, inside and outside the bank. A mêlée ensues, and a policeman in the bank is shot and critically wounded. The brothers hijack the movies/2000/ance that is meant to take the policeman to the hospital, and their dilemma becomes whether to save the life of the law officer who is bleeding and bouncing on a stretcher in the back of the vehicle or do whatever is necessary to evade being caught by the police. Danny, in perhaps his only flash of insight, realizes that killing a Los Angeles officer means his own likely ambush at the hands of a pursuing dragnet. He, therefore, enlists the movies/2000/ance’s emergency medical technician, the hyper-competent and hyper-dismissive of everything and everyone Cam (Eiza González), to do what she can to save her patient’s life, even to the point of doing an operation to remove the officer’s spleen in the back of the movies/2000/ance, with directions by cellphone video from her ex-boyfriend surgeon.

The car-commercial gloss of the special effects makes for some rousing moments, but after a while those effects feel frenetic, as if the cam operator and effects supervisor had too much caffeine between takes. In one shot, the camera glides up the Los Angeles City Hall tower and slides back down again for no apparent reason. It behaves like a drone, weaving in and out, up and down, and round and round. The effect can be thrilling, even dizzying, at times, but also like a drone, it too often gets meddlesome and annoying.

Jake Gyllenhaal gives a bombastic performance, one that seems to beg for the same attention that the explosions and collisions more easily fetch, but he is no match for those fireballs. His good looks, sharp smile and athletic gusto should give a lift to his character’s lack of conscience and deficit of smarts, but his performance falls apart from the start. A better actor could elevate Danny, a run-of-the-mill crook, to tragic status, and reveal how an abandoned outcast becomes a hunted and haunted outlaw.

James Cagney revealed how easy it is to be twisted by trumped-up glory when he shouted: “Made it Ma! Top of the world!” at the end of “White Heat.” In the Safdie Brothers’ superb 2017 film “Good Time,” Robert Pattinson gives a commanding performance of a bank robber whose valid but misplaced concern for his mentally handicapped brother brings him and his hapless sibling to ruin. The ending is one of the saddest I remember in any caper misadventure. And unlike “Ambulance,” those movies understand family foundations, and use them not just to add sympathetic touches to their villains, but to acknowledge that those traits are what actually make the bad guys, and all guys, tick.

The violence is unrelenting as it is in most of Bay’s movies. But in some of his earlier films, especially “The Rock,” it had a point, and in “13 Hours,” it had a purpose. “Ambulance” may have the fearless, derring-do gusto of Bay’s earlier work, but it feels worn down. The faster its wheels turn, the more they spin out.

Some of the sick-humor jokes make up for the dramatic doldrums, but Gyllenhaal doesn’t deliver them well enough to get a rhythm going or to be on a roll. He’s no Bruce Willis. He has one good joke about a Mel Gibson look-a-like which might have worked better if the guy looked like Mel Gibson. Only Olivia Stambouliah as a smart-mouthed police lieutenant, and Keir O'Donnell as a sarcastic Gay FBI agent who was a college friend of Danny, make the most of their too-short but piercingly comic scenes. As lame as the sophomoric sex-laced jokes can be, those two deliver them with an off-the-cuff, self-mocking tone that elevate them above the obvious and mundane.

Disobeying the Eighth Commandment, like any deviation from a law, is often preceded by a defense or a rationalization. As I am filing my tax return this April, I am tempted to give into that same false reasoning. If I do, I know that the turning point quickly becomes a starting point, one that leads to other sins and other crimes. I recall that Marion Crane (Janet Leigh) in “Psycho” began her journey, one in which she was also chased, by stealing money from her boss. Marion believed she was entitled to a new start. The boss’s money provided her with what she thought was freedom. And that freedom took her straight to the Bates Motel.

The Danish version of “Ambulance” had two brothers who thought stealing money would help their ill mother obtain the health care she needed not from their native Denmark, but from Germany. The premise was an interesting one, a not-so-subtle dig at their country’s divisive health care industry. The story’s family dynamic was compelling, and at times, humorous. The two men behaved the way brothers, even criminal ones, do. In Bay’s version, which takes place in a modern American city, the family structure is altered. One brother is adopted so the two are part of a diverse family. This allows for alternative casting as well as alternatives to the traditional family, something Hollywood continues to shy away from. Danny’s natural father was a criminal too (“a legend” amongst bank robbers), and, most likely, a sharper one than his son. Danny’s mother, and Will’s birth parents, are barely mentioned.

I don’t mean to knock adoption; I just don’t get why it is used as a plot device when it could have been a strong theme, one worth exploring and contemplating. After all, we are all adoptees:

“All who are guided by the Spirit of God are sons of God; for what you received was not the spirit of slavery to bring you back into fear; you received the spirit of adoption, enabling us to cry out: ‘Abba Father.’” Romans 8: 14-17

“Ambulance” has the blare of a siren and the speed and grind of a race car, but with a running time of two hours plus, it loses steam before the gas tank runs empty, and the last rifle cartridge is spent. And when real concerns about morality, free will, and sin surface, it idles like a rusty jalopy.