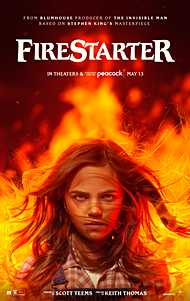 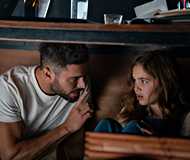 Fire in the Bible 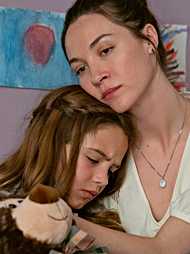 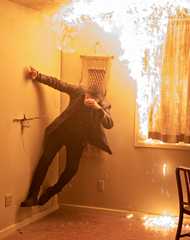 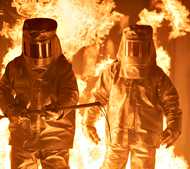 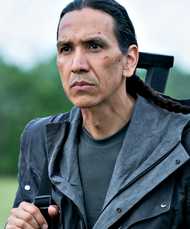 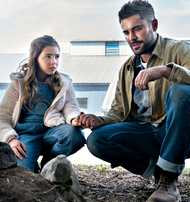 Andrew McGee and his wife Victoria have been keeping secrets, not from each other but from the world. In fact, they’ve gotten pretty good at keeping secrets because they’ve been keeping them from their daughter Charlie too, a pretty big one I might add. But I’m getting ahead of myself just a bit.

Andrew, Victoria and their 11 year old daughter Charlie live in a quiet part of Massachusetts, with no technological attachments to the world. In fact, Charlie’s only real exposure to the world is when she attends public school during the week. You see, Charlie and her family have been keeping their own secret. Each of them have supernatural abilities: Victoria and Andrew are telepaths and Charlie, well, Charlie is a telepath AND a Firestarter.

She’s the first of her kind. She has the ability to create fire from her mouth and hands at any moment. The problem is is that she has no control over her abilities due to her lack of “emotional control.” Victoria tells Andrew that Charlie needs to learn to harness and control the fire or people are going to get hurt, where as Andrew believes Charlie just needs to push her feelings down and that whenever she feels the urge to start a fire she needs to find a way to calm down.

Needless to say, the stress level rises when Andrew and Victoria’s big secret (you know the one they’ve been keeping from Charlie) comes knocking on their doorstep, looking for Charlie. In the process, Victoria is killed while Andrew and Charlie make their escape. If they are caught, the group will lock Charlie away to be studied, never to see her father again.

This is one fire that may be hard to put out.

The original “Firestarter” film came out in 1984 starring David Keith as Andrew, Heather Locklear as Vickie, and Drew Barrymore as Charlie. Even with an star-studded cast at that time (even though Drew Barrymore was still just getting her start), the film was a bomb at the box office, only drawing in $17 million on a $12 million budget. Even Stephen King, the author and screenplay writer, went on to say it was (and these quotes are his exact words, “One of the worst of the bunch” of the adaptations of his work he had seen, and dubbed it “flavorless…like cafeteria mashed potatoes.”

So the question I have for the filmmakers of this reboot is: if the 1984 version did so poorly, why did you attempt to remake it nearly 40 years later? Frankly, it’s not even so much that Mr. King and Mr. Thomas remade the film, but that they remade the EXACT same film from 40 years ago (same characters, same plot, etc.), and expecting a different outcome? I believe Albert Einstein said something about this exact thing…

Speaking of history, history is indeed repeating itself. Critics across the board are panning this film as one of the worst of King’s films (on Rotten Tomatoes it has a 12% approval rating. That’s lower than “The Watchtower”). Truthfully, even if critics didn’t say much about this film, it’s not doing so well with audiences. At the screening I attended last night, there were only 3 of us in the entire auditorium (and this was a 5 pm showing on a Friday night).

But even if this was a completely different take on the original “Firestarter,” “Firestarter” (2022) itself just paints a bleak, grim hopeless picture of a world void of light, void of God, void of anything really. Mr. King himself is an outspoken Secularist, as well as known as being strongly opinionated and vocal about his opposition toward religion and his worldview on Biblical Christianity is extremely distorted and, frankly, dangerous at times. I say all of this because Mr. King’s faith and view of the world always take center stage in his films, especially in “Firestarter” (2022) (one of the most bleak I’ve seen in a while). To read more on Mr. King, please read the “About Stephen King” section at the bottom of this page.

To the film’s credit (I always try to find something), Zac Efron and Ryan Kiera Armstrong are two talented individuals who really give everything they can to a film that is barely staying afloat. But they can’t save this one. The dialog, apart from a few moments, is too cliché and the plot has way too many holes, particularly in the beginning and toward the end. I left the theater no more caring about the characters than when I first arrived.

VIOLENCE: Very Heavy and at times extremely graphic. Note: I did not list every instance, as it isn’t appropriate. A cat is lit on fire (we see it burned, still alive and suffering until someone puts it out of its misery). A human being is set on fire inside of a car (we see them, burned, alive and suffering as well, until a character puts him out of his misery). Something catches on fire over a baby’s crib. A baby’s head catches fire (brief). There’s some blurred video footage with some violent images going on during a title sequence. A person rips their own eyes out.

A person says the government should terminate Charlie before she becomes too dangerous. Charlie destroys a LOT with her fire powers. Someone using telekinesis to destroy a house. Someone uses fire to destroy a couple buildings. Two characters die. A character uses telekinesis to make a guard kill another guard. Policemen are shot and killed. A man is shot in the leg. Someone is hit with a gun. People are deliberately burned. Someone is burned to ash. People are are shot and killed.

DRUGS: Characters are injected with experimental drugs during the title sequence

ALCOHOL: Two guys drink beer (one of those characters is drunk later).

SEX: A girl mentions that something is changing inside of her. When her dad suggests he go get her mother, she says “No, not THAT change.” There is a prayer for a cat that “he/she/they” is in “cat heaven.”

NUDITY: A teen is seen in his shirt and boxers. A man is seen in the shower (shoulders and up). Vicky wears a low cut top.

OCCULT: Someone is mentioned about psychic occurrences during a video recording. Telekinesis and mind control is used in multiple sequences throughout the film. A man has a tattoo on his back of an upside cross with Jesus on it (?).

Other: Blood comes pouring out of a characters eyes in a couple scenes. A frog is dissected. We see third degree burns on a few characters. We see a woman on a ventilator after a terrible accident. A character uses telekinesis on characters to give her stuff. A kid is bullied. A character tricks someone into seeing something they didn’t see.

“Firestarter” does have one redeeming lesson behind it. During the film, there is a moment where Andrew is sitting down with Charlie talking about her destructive abilities and warns her about how she needs to control her powers because “harming people not only harms them but also everyone else around them.”

An important lesson to be given to someone of Charlie’s or anyone’s age. Even as adults we might forget such a simplistic sentence like the one Andrew just gave Charlie. We’re ready to get back at someone because, as Charlie states in the film about her powers, “actually it feels pretty good.”

The Bible warns about harming others. Our role as Christians is to witness. How do we witness to others if we are out putting others down? Hurting others before they hurt us? How is that living for Christ?

“Let all bitterness and wrath and anger and clamor and slander be put away from you, along with all malice. Be kind to one another, tenderhearted, forgiving one another, as God in Christ forgave you.” —Ephesians 4:31-32

Jesus knows our hearts completely and our intentions.

So walk and live as the Lord wants.

“So whatever you wish that others would do to you, do also to them, for this is the Law and the Prophets” —Matthew 7:12

“Firestarter” (2022) is an absolute misfire (pun intended). Perhaps I am too critical of this film, but I’ve been doing this for a while and I’ve seen enough of Mr. King’s movies to know what he is capable of, filmmaking-wise, and this is a poor example. When a film has had almost 40 years to try again, you expect something different. In one of the comments section of an on-line forum, a person stated that perhaps in the 2022 version Charlie’s daughter could have been the firestarter and the premise could have been around how Charlie relates to her daughter’s struggles. Now that would have been an interesting premise.

All that aside, “Firestarter” (2022) is still an extremely violent (parts of it graphic), profane film; not to mention it is just downright depressing. We don’t need any more depression in the world right now. I strongly discourage all Christians of all ages from seeing this film. It’s a hard pass.