for strong sci-fi violence and gore, some grotesque images, and for language. 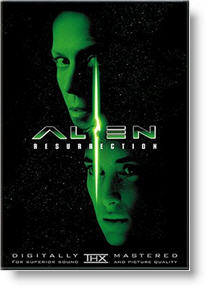 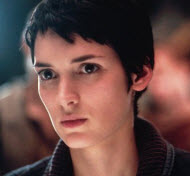 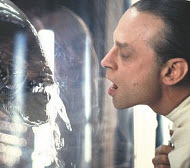 Questions and Answers about The Origin of Life 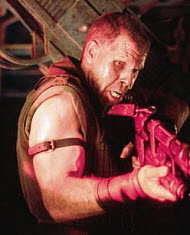 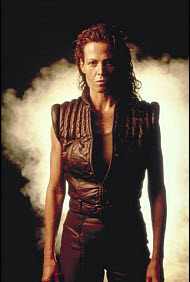 Usually I enjoy bad movies because they are great to laugh at—but when the bad movie in question is a sequel to my all-time favorite movie “ALIENS” it’s not funny at all. It is sad and upsetting. Granted, “Alien: Resurrection” is better than the squalid “Alien 3,” but not by much.

To sum up the plot, in the first “Alien”, Ellen Ripley (Sigourney Weaver) met with the first infamous alien, and in “Aliens” she met more. These aliens are hideous, viscous creatures that live inside a person and explode through their chest. In “Alien 3,” Ripley gets infected by a queen alien (one that can lay eggs) and then dies. 200 years later in “Alien: Resurrection”, Ripley is brought back to life through cloning. Not just a clone, mind you, a clone that is half Ripley, half alien. To top it off, her clone has a queen alien in it. It is left a complete mystery as to how cloning someone from their DNA could make an extra alien, and why Ripley is half an alien is an even bigger mystery. Of course, mayhem ensues when the aliens are bred and break out of their cages, and everyone dies except the heroes. Nothing you haven’t seen before.

“Alien: Resurrection” may not live up to its predecessors, but the sequel has better effects. Right? Wrong! Ten years after “Aliens” and the effects are *worse*. The aliens look like they are covered in metallic black moss, they move like jerky robots, and make lion sounds. Since when did the aliens sound exactly like zoo animals? The queen bears little resemblance to an actual queen and is not realistic whatsoever. Yet these bad effects are nothing as compared to the “new” alien (called a Newborn) at the end of the movie. Is there a more unimaginative alien in Hollywood? None that I can think of! Add to that many leaps of logic, such as aliens dodging bullets, people holding their breath for five minutes under water, and a totally unbelievable end scene and you have one frustrating movie.

There are a few scenes that are interesting, such as the fate of the Newborn and when Ripley meets her failed clones. Suffice it to say this latter scene makes a strong case for euthanasia. Ugh. This film is definitely not for kids under eighteen. This is not nearly as scary as the recent “Event Horizon” but it has more than its fair share of blood and guts. The Lord’s name is taken in vain, there is nudity (non-sexual), and there is what may be a sex scene between Ripley and an alien. Christians should definitely avoid this movie unless they know for sure that they can handle this kind of content.

Positive
I thought the movie was great, effects and all. To answer some of your questions, the Ripley clone was brought about from blood samples they got at the prison colony in Aliens 3 (I know, 200 years later?) They explained that in the beginning of the movie. It’s my guess that once infected with an alien it somehow altered or contaminated her blood/DNA, mixed it, bringing about the half human half alien… (?) In my opinion the aliens look better, including the queen. In the previous movies you could always tell they were operated by rigs, or people in suits. The newborn was nice, and the ending was good too, different.

Jonathon
I realize that everyone has their own opinions, I just don’t understand how some people come up with them! I thought Alien Resurrection was a great movie! If it wasn’t for the mediocre ending, I would say it is better than “Aliens.” I thought it had good special effects, interesting characters, good action, etc. I agree with the viewer that sometimes the aliens looked a little metallic and the alien baby didn’t look very good, but overall the special FX far exceeded the prior movies. I thought the alien baby was a good idea, but it could have looked a lot better.

S. Payne
Odd. I thought the effects were quite a bit better than the mechanical rendering in Aliens, and much better than the CGI in Aliens 3. As for “moss”, I don’t know where that was seen. To mistake maternal bonding for a “sex scene” seems odd as well. The movie spends quite a bit of time on the profound question of “what does it mean to be human?”. It’s unfortunate, and again, odd that the reviewer missed this. But what is truly amazing is the reviewer recommending “Starship Troopers,” arguably one of the worst movies ever made, as “an action-packed sci-fi movie” when it is, in fact, nothing more than an immensely dissapointing, purile soap-opera with some nifty special effects.

Doug Sirman
I thought that this movie was almost as good as the second film titled “Aliens”. The special effects were amazing. This film has remained true to its' dark, bleak interpretation of the future. The action/suspense was was not as intense as the second film but it nevertheless was entertaining. I loved Sigourney Weaver’s portrayal of the Ripley clone. Her struggle between her human and alien sides provides an analogy of how we struggle with the flesh and the Spirit. I thought that this struggle added a new dimension to the traditional Alien gore-fest. There was more gore than necessary. I wish that the movie-makers would use implied gruesomeness rather than showing us the cross-section of someones' freshly cloven skull.

There was some profanity but not to the extent that I’ve seen in most films. The most disturbing part of the movie for me was the ending. I do not wish to spoil this for those who haven’t yet seen the movie. However, I think that it is fair to forewarn you that the scene is all to reminiscent of an ABORTION. I found it quite disturbing!!!… Who was making the statement? And what statement was it???? Were they trying to justify abortion or simply show how gruesome and evil it really is? I guess that you guys will have to make the call after seeing the film!

Scott J. Suppan, Age 28
Negative
I thought the effects were great. but God Has been working on me and after this movie I decided not to go to anymore rated R movies. There is always something bad in them, (most of the time there is something against God the one I love so much! that hurts!) this is why they are rated R. This movie (Alien res.) made me realize God does not want me to see movies like these, even if they have good graphics or plots. rated R is no longer for me. Thank you Jesus for delivering me from this addiction. I pray more follow!!!

Sam McNear
“Aliens”—excellent, scary, fun! “Alien: Ressurection”—puh-leese! My dad and I left the theater feeling very unfulfilled. I hear they HAD to pay Sigourney Weaver $12 million to play the part. I believe it. This movie did have all the elements of “Aliens”, but without James Cameron behind the camera, it looked like “Alien 3” meets “Waterworld” then runs into “Space Pirates.” Don’t waste your time on this one.

Jeffrey James
What a disappointment for Alien fans. Why can’t we have a good plot, snappy dialogue without excessive gore and body parts? This movie missed on all accounts in my opinion. The only interesting theme was the DNA clones and all the provocative thoughts regarding this procedure. The resulting mix of Alien and human DNA, however, distracted from the threat and thrill of the original Alien monsters. You’d be better off to rent Aliens, the second movie in the series and my favorite, than seeing this. It’s disturbing and excessively violent. And I thought the chest burster scene in the first movie was gory! This fourth sequel makes that movie look like a trip to Mr. Roger’s Neighborhood.

Stephanie Hanson, age 40
Comments from non-viewers
In response to some of the responses on your Web site concerning Alien Resurrection, I have a hard time believing that any Christian who fears God and wants his will to be done in there lives would be justified in seeing this movie. Although I am a fan of the Alien Saga, I cannot say that I have seen this movie and for a very good reason. I do however have the script on my computer and have read it. I was appalled by the excessive language and portrayal of violence. Almost every third line on the script had Profane Language, and there was also excessive language in the caption notes (Text other than dialogue). I had to edit out the Profanity and replace them with text that was cleaner and readable. There is absolutely no respect for God in this movie (one real reason why God’s children shouldn’t be watching it)…