for disturbing images, language, some sexual content, nudity and drug use. 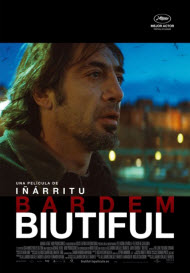 a father’s love for his children

medium / communicating with the dead

Is medium John Edward of “Crossing Over” speaking to the dead? Answer

sex with brother in law

Learn how to make your love the best it can be. Discover biblical answers to questions about sex, marriage, sexual addictions, and more.
Gay kiss

redemption in the Bible

Alejandro González Iñárritu brings us “Biutiful” after the artistic success of “Amores Perros,” and the bigger English-speaking films “21 Grams” and “Babel.” Javier Bardem stars as Uxbal, a single father of two children who works in the black market providing under the table jobs for illegal immigrants from Africa and China.

When diagnosed with terminal prostate cancer, Uxbal has some realizations about the failures of his life. In attempts to help people, mend broken relationships and fill his own personal void, he faces unimaginable hardships and setbacks, as well as the knowledge of his own imminent death.

If you have any knowledge of Iñárritu’s work, then you will know what to expect. If you do not, be aware that he focuses heavily on the negative and heavy side of life and the choices we face. Themes of his films generally contain drug abuse, domestic violence, broken relationships, alcoholism, womanizing, adultery, and people scraping a living through illegal or “gray area” means. “Biutiful” is no different.

fall of man to sin and depravity

Uxbal works in the black market and exploits his employees for a cut of the profits. Once he discovers he’s terminally ill, he makes an effort to improve their situation, but he had not tried beforehand. He goes to a faith healer/spiritual counselor who believes in healing stones and New Age style medicine. The entire movie is dark, exploring the depths some go to when desperate.

The language is moderate for an R-rated film, and it IS all in Spanish. F**k is used several times, as well as a few other profanities.

Along with the language, Uxbal’s wife is introduced to us naked having slept with his brother. Uxbal walks through a strip club with multiple women in a state of complete undress (hence it being a strip club), and there is a kiss between two men with implied sexual touching. Uxbal’s wife funds her alcohol problem prostituting herself, although this is never shown on screen, except for the scene I just mentioned.

The violence is moderate. There is a scene where men are arrested and beaten with batons. Various people (women and children included) are seen lying dead, having been accidentally gassed during the night. There is one scene of man snorting cocaine, and another of him urinating blood. Nothing is glamorized or glorified, although I do think the strip club scene was unnecessary and overdone. Ultimately, it paints a picture of Uxbal’s brother more than anything. This is a dark film about a dark and haunted character whose future is now death.

Hope is found in Christ, and in Christ alone. It is in Christ alone where we also find perfect love, forgiveness, kindness and a Father whom we can trust and rely on implicitly to have our best interests at heart. We are God’s creation, and He will not forsake us. In this world, we face so much heartache, pain, temptation, and make decisions based on our emotional state. We are imperfect.

“For He sent His one and only Son, that we would not perish, but have everlasting life.” (John 3:16)

When we can only rely on Earthly things, we are going to struggle. Uxbal’s marriage fails. His health fails. His friends fail. His work fails. He therefore believes his life has failed. Christ offers everything that we need to be able to look past the darkness on Earth. We don’t need to seek fulfillment in drugs, alcohol, women/relationships, or money. God is so much more than that. He is supernatural far beyond our complete understanding. When watching “Biutiful,” my heart went out to this character who just needed a rock on which to base his life. He is crying out in his spirit for something, but despite an emotional gratification he gets from his faith healer, she can not give him any true comfort. Only God offers that.

“Biutiful” was nominated for two Academy Awards. It’s beautifully and thoughtfully shot. The script is solid and reverts to a lot of “normal” conversation to keep it in reality. The acting is superb and does everything it needs to to drive the emotion home to the watcher. However, this will have only two kinds of hardcore audiences. Either filmmakers who want to see an artist at work, or people who need an example of how life could be even worse than theirs. It’s horridly depressing; it bites you where it hurts, and sadly doesn’t offer any real hope at the end.

As far as an evening of entertainment goes, this it not it.

Movie Critics
“…noble effort… In trying to distill a grand vision, Iñárritu does two things, one not so good, one great. He tries widening the scope of his story, the way he did in ‘Babel,’ taking time to show us the tribulations of an African family in Spain and the burgeoning relationship of two gay Chinese criminals. As in ‘Babel,’ this effort feels labored, perfunctory and aching with politically correct politeness. The narrative stalls. …”

Mick LaSalle, San Francisco Chronicle
“…The film’s moral sense is heartfelt but not especially daring; by giving us a good man as his hero, Gonzalez Inarritu possibly weakens his case against the general sense of injustice in his film …”

Roger Ebert, Chicago Sun-Times
“…may be too dark and depressing for mainstream audiences, but it is clearly the heartfelt and very personal achievement of a master filmmaker with a potentially award winning performance from its star. …”

Pete Hammond, Boxoffice Magazine
“…Watching Bardem occupy, embrace and ultimately own a multifaceted role like the one he plays in ‘Biutiful’ is a rare treat, and an absolute joy. Which is good, because joy is in short supply in Inarritu’s film. …”

Sean O’Connell
“…‘Biutiful’ is a love story about the bonds of parenthood with pinpoints of redemptive light amid the darkness. …”